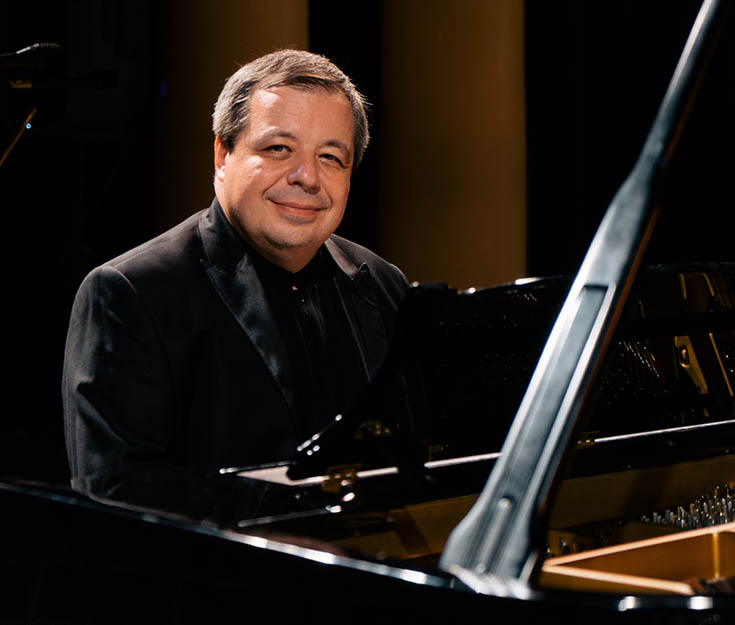 Alexey Botvinov is an exceptional pianist, musical activist and producer. The most acclaimed Ukrainian pianist, Botvinov is one of the best specialists in  Rachmaninoff music worldwide.  Botvinov is the only pianist in the world who performed Bach‘s masterpiece „Goldberg Variations“ more than 300 times on stage.


Alexey Botvinov performed in over 45 countries. People’s Artist of Ukraine, in his country’s press he enjoys such words like “symbol of high spirit” or “true mark for authentic sense of music”.

Alexey Botvinov was born in all-musicians family in Odessa, where he studied with Prof. Mogilewskaja and later at the Conservatory of Odessa with Prof. Kardaschew. 1987-89 he was a student at the Moscow Conservatory with famous  Prof. Gornostayeva. His last mentor was legendary French pianist Alexis Weissenberg. Botvinov is a prize-winner of such important piano competitions as the 1st Rachmaninoff-Competition in Moscow (1983), the 8th International Bach-Competition in Leipzig (1988) and the 1st Clara-Schumann-Competition in Düsseldorf (1994). In 1993 he played Tchaikovsky's First piano concerto for the opening of the concert season at the Tonhalle Zürich with the Radio Symphony Orchestra Moscow under the baton of Vladimir Fedoseyev, which was highly acclaimed by the press and by the audience.

For his breathtaking performance of "Goldberg-Variations" ballet in June 2001 at the Deutsche Oper Berlin the press wrote: “a real firework at the piano” (“Berliner Kurier”). “Le Figaro” wrote about pianist’s CD of “Goldberg-Variations”  - “Superbe!” . This recording landed on 2nd place in Swiss music-charts. Next recording - “Botvinov plays Rachmaninoff” (2002) was acclaimed as “ the best classical recording  of the month” in Switzerland.

In 2005 he played his debut recital at the Wigmore Hall London and in 2006 – at the Berlin Philharmonie.

During 2006 he was on  tours in China with Zurich Chamber Orchestra  and with Koenigliche Philharmonie Flandern  in Belgium and Germany.

2009-2010 Botvinov  was  Artistic Director of Odessa National Opera Theater. During that time he initiated two premiers – opera “Turandot”  - director C.Von Goetz (Germany); and ballet “Nureyev forever” with solo piano by A.Botvinov. They were very first modern-concept productions for Opera Theaters in Ukraine at all.

Recently Botvinov explores new ways of presenting classical music. Among his new innovative projects there are “Visual reality of Music”, “Piano Light Show” and “4 Elements”, where music and visual effects have converted a traditional concert into  multimedia mystery.

2011 Botvinov created another highly innovative project – synthesis of Drama Theater and classical concert. Basing on  novel of  Swiss-Russian writer M. Shishkin “The Light and the Dark”, Botvinov made his debut as a theater director in art-project, where his solo performance harmonizes on stage with drama actors. Project was highly successful in Ukraine, and later as German-speaking version at several Swiss theaters.

2015 Botvinov initiated a new International music festival  “ODESSA CLASSICS”, where he is President and artistic director. Annual festival made sensational success and already became the most important classical music festival in the Ukraine and one of the leading music festivals in Eastern Europe.

November 2015 Alexey Botvinov was awarded the title “People’s Artist of Ukraine” – the highest artistic achievement in the Ukraine.

2020 Alexey Botvinov became a “Knight of the Orden of the Star of Italy” by decision of the President of the Italian Republic and received “Swiss Wilhelm Tell Award-2020”.

2021 Alexey Botvinov and Daniel Hope made recording of Alfred Schnittke pieces for violin and piano at “Deutsche Grammophon” with sensational success worldwide.