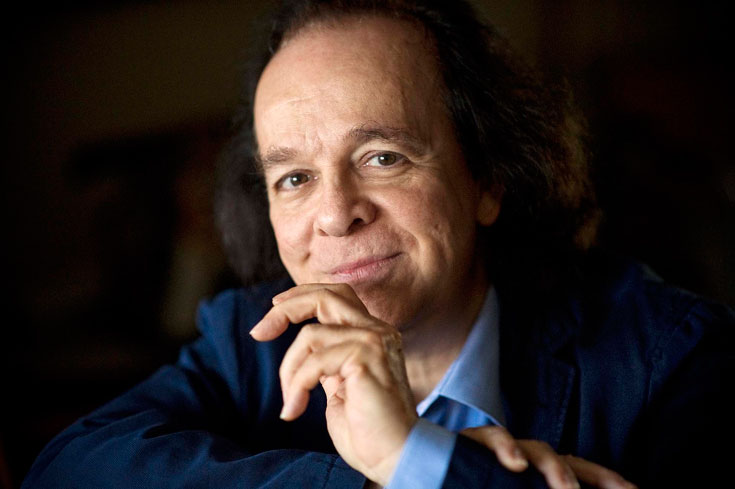 Cyprien Katsaris, the French-Cypriot pianist and composer, was born on May 5, 1951 in Marseilles. He first began to play the piano at the age of four, in Cameroon where he spent his childhood. His first teacher was Marie-Gabrielle Louwerse.

A graduate of the Paris Conservatoire where he studied piano with Aline van Barentzen and Monique de la Bruchollerie (piano First Prize, 1969), as well as chamber music with René Leroy and Jean Hubeau (First Prize, 1970), he won the International Young Interpreters Rostrum-UNESCO (Bratislava 1977), the First Prize in the International Cziffra Competition (Versailles 1974) and he was the only western- European prize-winner at the 1972 Queen Elisabeth of Belgium International Competition. He was also awarded the Albert Roussel Foundation Prize (Paris 1970) and the Alex de Vries Foundation Prize (Antwerp 1972).

He gave his first public concert in Paris, at the Théâtre des Champs-Elysées on May 8, 1966, as a “Knight” of the youth competition “The Kingdom of Music”; he performed the Hungarian Fantasy by Franz Liszt, with the Orchestre Symphonique d’Ile-de-France conducted by René-Pierre Chouteau.

In addition to his activities as a soloist he founded the “Katsaris Piano Quintet”. This has received a very enthusiastic response from both the press and audiences in the Americas, Europe and Japan.

His discography consists of solo works by most of the greatest masters as well as works for piano and orchestra including Bach Concertos with the Franz Liszt Chamber Orchestra, Brahm’s Concerto no. 2 with Eliahu Inbal conducting the Philharmonia (London), both Concertos of Mendelssohn with Kurt Masur and the Leipzig Gewandhaus Orchestra (of which Mendelssohn had been music Director), and the complete Concertos by Mozart, recorded live and performed in Salzburg and Vienna with Yoon K. Lee and the Salzburger Kammerphilharmonie.

In addition to the standard repertory, Cyprien Katsaris has recorded, as world premières, long lost works such as the Liszt/Tchaikovsky Concerto in the Hungarian style with Eugene Ormandy and the Philadelphia Orchestra, Beethoven’s own piano arrangement of his ballet The Creatures of Prometheus and Gustav Mahler’s original piano version of Das Lied von der Erde with Mezzo Brigitte Fassbaender and Tenor Thomas Moser.

In 1992, the Japanese NHK TV produced with Cyprien Katsaris a thirteen-program series on Frédéric Chopin which included masterclasses and his own performance. On October 17, 1999, the New York concertgoers offered him a standing ovation in Carnegie Hall for his recital dedicated to Frédéric Chopin, performed on the day of his 150th death Anniversary. This concert was recorded (audio and video) and has been issued on the PIANO 21 label. On January 27, 2006, the day of the 250th Anniversary of Mozart’s birth, he was the soloist at the inaugural concert of the Mozart Orchestra Mannheim founded and conducted by Thomas Fey. In March 2006 Cyprien Katsaris was the first pianist ever to give masterclasses in Franz Liszt’s house in Weimar since Liszt, who taught there for the very last time in 1886, the year of his death. In August 2008, he was invited to give two concerts on the occasion of the Beijing Olympic Games at the National Center for the Performing Arts. In addition to the world premier of a concerto for ten pianos and orchestra – China Jubilee – by the composer Cui Shiguang, he improvised on an ancient Greek melody, and on, inter alia, Chinese melodies, in tribute to the universality of the Olympic Games.

He has also conducted masterclasses at the Mannes College of Music, in New York City, the University of Toronto, the Salzburg Mozarteum, the Arts Academy in Mexico, The Academy of Performing Arts in Hong-Kong, the Royal Conservatory of The Hague and the Shanghai Conservatory of Music. In addition he was appointed Artistic Director of the Echternach International Festival (Luxembourg) from 1977 to 2007.

Mr. Katsaris’ work has been honoured and recognized by the following awards: “Artist of UNESCO for Peace” (1997), “Commandeur de l’Ordre de Mérite du Grand- Duché de Luxembourg” (2009) and “Knight of the Order of Arts and Letters” (France 2000). He also received the “Médaille Vermeil de la Ville de Paris” (2001) and the “Nemitsas Prize” (Cyprus, 2011). He is a member of ADAP, the Association of Artists for Peace and Honorary President of “Lisztomanias International”.