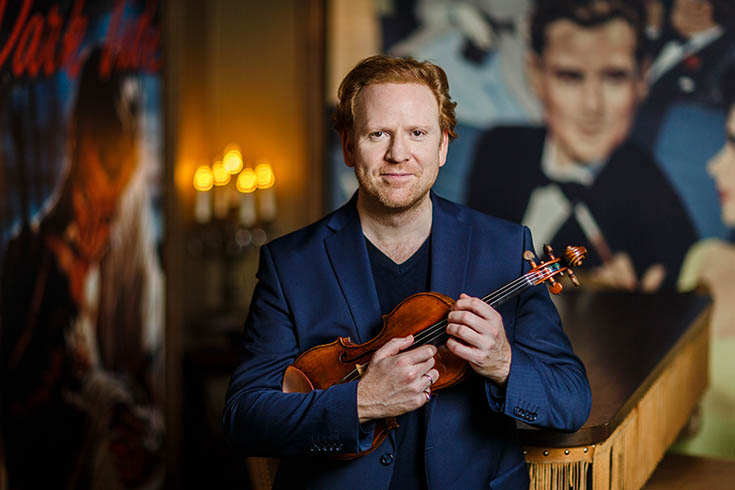 Daniel Hope: "Thrilled to announce a closer artistic relationship with the splendid Odessa Classics Festival from 2019. Alexey Botvinov and his team have done a wonderful job of building up this festival in a beautiful and historic city. And it is both extremely humbling and inspiring to think of many of my musical heroes and their role in Odessa‘s musical life: Pyotr Stolyarsky, David Oistrakh, Nathan Milstein, Boris Goldstein, Emil Gilels, Sviatoslav Richter, Zakhar Bron and many more. Looking forward to more music in Odessa!"

British violinist Daniel Hope has toured the world as a virtuoso soloist for more than twenty years. He is renowned for his musical versatility and creativity, and for his dedication to humanitarian causes. Hope performs as soloist with the world’s major orchestras and conductors, directs many ensembles from the violin, and plays chamber music in a wide variety of traditional and new venues. He was also the youngest ever member of the Beaux Arts Trio during its last six seasons. Raised in England and educated at Highgate School in London, Hope earned degrees at the Royal Academy of Music, where he studied with Russian pedagogue Zakhar Bron.

Called “adventurous and brilliant” by the New York Times, Hope was named “the most exciting British string player since Jacqueline du Pré,” by the London Observer. A recent New York Times review summarized him as “a violinist of probing intellect and commanding style,” and continued: “In a business that likes tidy boxes drawn around its commodities, the British violinist Daniel Hope resists categorization. Mr. Hope, a compelling performer whose work involves standard repertory, new music, raga, and jazz, emphasizes thoughtful engagement over flamboyant display. In his most personal undertakings, he puts classical works within a broader context – not just among other styles and genres but amid history, literature, and drama – to emphasize music’s role as a mirror for struggle and aspiration.”

Hope has performed in all of the world’s most prestigious venues and with the greatest orchestras including the Boston, Chicago, Toronto, and Atlanta Symphony Orchestras, as well as the major orchestras of Berlin, Birmingham, Dallas, Detroit, Dresden, Israel, London, Moscow, Oslo, Paris, Stockholm and Vienna. He has performed at the world’s most important festivals, such as the BBC Proms and the Salzburg, Lucerne, Ravinia, Verbier and Tanglewood festivals.

Highlights of Hope’s 2011-12 season include appearances with the Los Angeles Philhamonic and Leonard Slatkin at the Hollywood Bowl, the Britten Violin Concerto with the BBC Symphony Orchestra, his third appearance with the Oslo Phiharmonic Orchestra and recitals in New York, Washington, Aspen, and at Savannah Music Festival, where Hope has been Associate Artistic Director since 2003, and where he has recently renewed his contract until 2015. Hope is also the Artistic Director of the prestigious Festspiele Mecklenburg-Vorpommern, a summer Festival set in one of Germany’s most beautiful provinces and hosting over 120 concerts for more than 70,000 visitors. In addition to the festival’s many chamber and symphonic concerts, Hope arranged a special multi-genre concert to raise awareness of the world’s climate change crisis, supported by HRH The Prince of Wales.

Over the years Daniel Hope has commissioned and performed dozens of new works. In the summer of 2009, he gave the world- and UK-premiere performances of Sir Peter Maxwell Davies’s second violin concerto, Fiddler on the Shore – written for Hope and the Leipzig Gewandhaus Orchestra – in Leipzig and at London’s BBC Proms. In 2011 he gave the world première performance of Bechara El-Khoury’s “War Concerto”, also written for him, with the NDR Symphony Orchestra – he will perform the piece again in Berlin with the Konzerthausorchester in June 2012, and with the Oslo Philharmonic in September 2012. Hope has enjoyed close contact with composers such as HK Gruber, Sofia Gubaidulina, György Kurtág, Krzysztof Penderecki, Alfred Schnittke, and Mark-Anthony Turnage. He recorded Toru Takemitsu’s violin concerto, “Nostalgia”, with the composer. In 2008, Hope and Stewart Copeland, the former drummer of The Police, premiered Copeland’s Celeste for violin and percussion at the Savannah Music Festival.

In January 2012 Daniel Hope renewed his exclusive contract with Deutsche Grammophon, for whom he has made eight acclaimed recordings to date. His latest release for DG is a celebration of the highly influential violinist and composer Joseph Joachim (1831- 1907) and is centred around the Bruch concerto, a work with which Joachim is closely associated. The Bruch was recorded in summer 2010 with the Royal Stockholm Philharmonic Orchestra under Sakari Oramo. His previous release, Air. a baroque journey, looks at the history of the violin in the Baroque era. The CD pairs well-known works such as Pachelbel’s Canon, the folk tune “Greensleeves” and Bach’s sublime Air with rarely-heard compositions by Falconieri, Matteis, Geminiani and Westhoff, among others. Gramophone magazine called it “an exciting disc, with a heady, pied-piper power over the listener that comes from realizing that the bright sense of discovery once felt by these composers is being experienced just as much by their modern-day interpreters. You can’t ask for much more than that.” Hope’s 2007 recording for Deutsche Grammophon of the original version of the Mendelssohn Concerto and Octet was selected as one of the year’s best recordings by the New York Times.

He has written scripts for collaborative performance pieces with the Oscar-winning actor Klaus Maria Brandauer, including “War and Pieces,” “Mozart Unplugged!” and “Dietrich Bonhoeffer – Someone Had to Do Something.” He also wrote “An Audience with Beethoven” for Mia Farrow, and “Forbidden Music,” featuring poetry and music written by prisoners at Theresienstadt. He has worked extensively as a presenter for both radio, film and television in the United Kingdom, Germany and the United States. His cutting-edge website features a video blog which he films and produces himself.

Yehudi Menuhin invited the 11-year-old Daniel Hope to join him playing Bartók duos on German television, launching a long artistic partnership consisting of over 60 concerts, including Lord Menuhin’s final concert appearance on March 7th 1999, in which he conducted Hope’s performance of Alfred Schnittke’s Sonata for Violin and Chamber Orchestra.

Daniel Hope plays the 1742 "Ex-Lipinski" Guarneri del Gesù violin, put at his disposal by an anonymous family from Germany. He lives in Vienna.