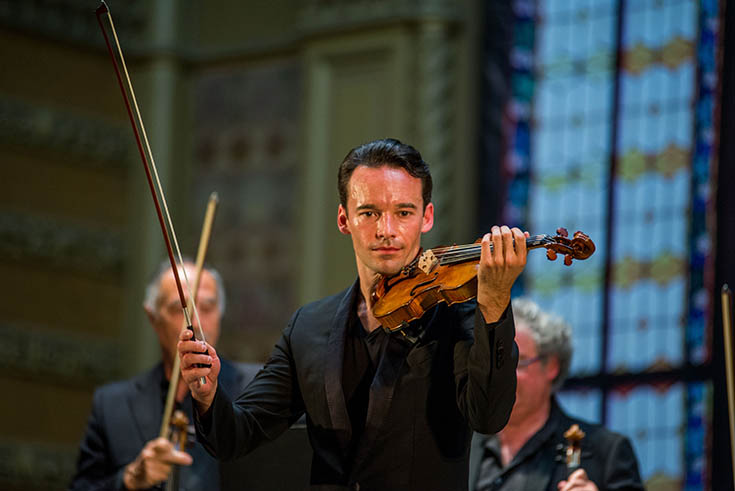 Linus Roth, who received the ECHO KLASSIK Award as 'Best Newcomer' 2006 for his début CD on the label EMI, was awarded his second ECHO award in 2017 for his recording of the violin concertos by Shostakovich and Tchaikovsky with the London Symphony Orchestra under Thomas Sanderling.

Linus Roth has made a name for himself internationally, not just with his acclaimed work in core repertoire, but also with his discovery / rediscovery of works that have undeservedly fallen into oblivion.  He has devoted special attention to the works of Mieczysław Weinberg, both on the concert platform and the recording studio.  Roth's recording of the complete works for violin and piano by Mieczysław Weinberg, released in 2013 by Challenge Classics to wide public and critical acclaim was followed up by recordings of Weinberg’s Violin Concerto with the Deutsche Symphonie-Orchester and his Concertino with the Württemberg Chamber Orchestra Heilbronn.  Both CDs were selected as 'Editor’s Choice' by Gramophone magazine.  Making Mieczysław Weinberg’s oeuvre known to a wider audience is also the aim of the International Weinberg Society, which Linus Roth founded in 2015.  This association organises and sponsors concerts, readings, exhibitions, interdisciplinary events and publications on the work and life of the Polish-Jewish composer.  For the 100th anniversary of Weinberg’s birth in 2019, Linus Roth will curate two days of events dedicated to the composer in the form of six concerts at Wigmore Hall in London.  In addition to chamber music works, all of Weinberg’s six sonatas for violin and piano as well as the three sonatas for solo violin will be played, including by Linus Roth himself.

Linus Roth attended the preparatory class of Prof. Nicolas Chumachenco at the Musikhochschule in Freiburg, Germany, before going on to study with Prof. Zakhar Bron.  Subsequently, he pursued his studies for several years with Prof. Ana Chumachenco at the Universities of Music in Zurich and Munich.  Salvatore Accardo, Miriam Fried and Josef Rissin have also been important influences on him.  During his studies, Linus Roth held a scholarship from the Anne-Sophie Mutter Foundation.

In October 2012, Linus Roth was appointed Professor of Violin at the 'Leopold-Mozart-Zentrum' at Augsburg University and is also the artistic director of the 10th Leopold Mozart International Violin Competition, which will take place in 2019 in Augsburg. In addition, Linus Roth is the Founder and Artistic Director of the International Festival Ibiza Concerts and from 2020 on of the music festival Schwäbischer Frühling in Ochsenhausen /Germany

Linus Roth plays the Stradivarius violin 'Dancla' from 1703 on kind loan from the music foundation of the L-Bank Baden-Württemberg.

In his free time, Roth enjoys fitness sports of all kinds, travelling, eating out and loves boating around the Mediterranean.  He has lived in Munich for many years.