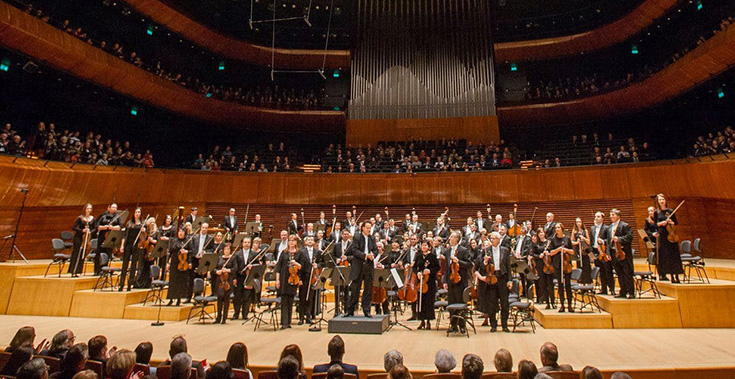 Odessa, one of the most beautiful cities on the Black Sea Coast, can look back upon a remarkable cultural history. The home of a large port and a bustling city of 1.3 million people today, Odessa is multinational to the core, with one of the broadest ethnic make-ups in the entire region. From Georgian to Greek, from Armenian to Jewish, from Russian to Bulgarian, these communities and many more form an integral part of this cosmopolitan city whose heritage spreads as far west as France and Italy. At the end of the nineteenth century, Odessa was a major cultural center, visited by many outstanding musical personalities. Violin pedagogue Piotr Stoliarsky and his pupils David Oistrakh and Nathan Milstein are among Odessa’s best known musical “children”. The pianists Emil Gilels and Sviatoslav Richter also grew up in Odessa, as did Shura Cherkassky, who was born on Pushkin Street, one of the city’s most colorful avenues.

From this proud musical tradition comes the Odessa Philharmonic Orchestra, the vast majority of whom are graduates of the Odessa Conservatory and almost half of whom entered the Conservatory from the Stoliarsky School. The orchestra was founded in 1937 and throughout the Soviet era performed regularly at home under such conductors as Nathan Rachlin, Yuri Temirkanov, Kurt Sanderling, Arvid Jansons and also Mariss Jansons. During the Soviet years, Odessa, a major center before the revolution, was relegated to the ranks of “regional” city. Unlike Moscow and St. Petersburg, in Odessa the orchestra was not allowed to travel outside the borders of the USSR.

With the independence of Ukraine, the orchestra’s status rose; in January of 1993 the Government of Ukraine formally awarded the Odessa Philharmonic Orchestra federal status. The OPO is the only performing arts organization in Ukraine outside of Kiev to attain this distinction.

The new status was acknowledgment of the orchestra’s dynamic progress during the preceding two years under new music director Hobart Earle. The orchestra has since become the first from Ukraine to cross both the Atlantic Ocean and the Equator. In the years since 1992 the orchestra and Hobart Earle have made a total of fifteen trips abroad to twelve different countries, performing in such major concert halls as the Musikverein in Vienna, the Philharmonie in Cologne, the Beethovenhalle in Bonn, the Barbican Hall in London, the National Auditorium in Madrid, the Gr eat Hall of the Moscow Conservatory, Great Hall of the St. Petersburg Philharmonic Society, Carnegie Hall in New York and the Kennedy Center in Washington, D.C., Orchestra Hall in Chicago, Davies Hall in San Francisco and the General Assembly of the United Nations. In addition to their regular concerts at home in Odessa, during the 1990s the orchestra and Hobart Earle have traveled to the Ukrainian cities of Lviv, Ivano Frankivsk, Ternopil, Chernivtsy, Uzhhorod, Vinnitsya, Zhitomir, Khmelnitsky, Kirovograd, Poltava and Mikolayiv, in addition to making a total of twelve different trips to perform in Kyiv.

In 1994 the OPO became the first symphony orchestra from a former republic to perform the Great Hall of the St. Petersburg Philharmonic Society since the breakup of the USSR. Today, the local audience in Odessa takes pride in the orchestra’s achievements and fill the concert hall regularly. The OPOs series of CD recordings “Music of Ukraine” under Hobart Earle for British record label ASV features previously unrecorded works by Ukrainian composers. In June 2002, the orchestra’s status was raised again, when the President of Ukraine, Leonid Kuchma, signed a decree granting National status to the Odessa Philharmonic Orchestra. The orchestra thus becomes the first organization in the performing arts in Ukraine outside of the nation’s capital, Kyiv, to acquire national status. It is also the only performing arts organization in the entire country to go from regional status to national status since the independence of Ukraine in 1991.