Author's reading of the play 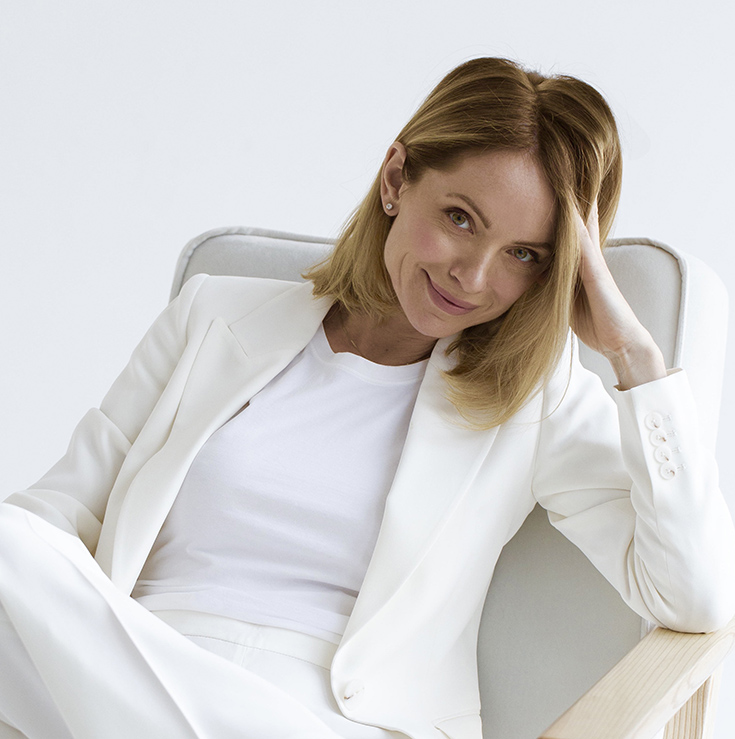 2015 – the first collection of short stories Women As Women Are was published in Brand Book Publishing Kiev, Ukraine. In a short time the book was widely known in Ukraine due to the original irony, subtle humor, unexpected ending, exciting and instructive subjects.
November, 2015 the book was among the ten best-selling books in Ukraine on the version of the book chain shops Bukva and Book Supermarket.
Currently the book is being translated into English.
The second book To Stay At Home On Monday and the third one Sharks Also love were published in 2017 in BookChef publishing house.
2019 – the first novel The Shadow in Profile was published in Meridian Czernowitz.
2020 – a new collection of short stories Tender People Left Alive is being prepared for translation into English. 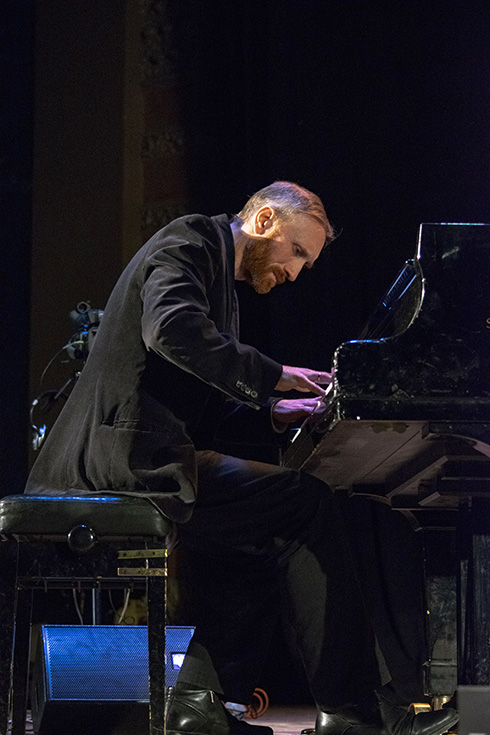 Since 2000 he is a teacher of piano and jazz improvisation at the Odessa College of Arts, conductor of the college Nikolai Goloshchapov Big Band. 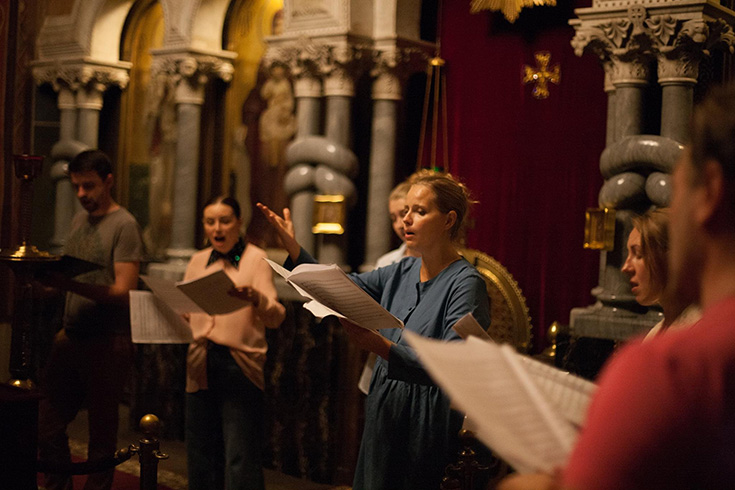 The musical history of Ukraine is not obvious, as it is a history, which is emerging today, here and now. The only clear thing - the lack of a holistic understanding of the different processes, necessary for the formation of an in-depth picture of what our music was like in different historical periods.

The project Musica sacra Ukraina: partes dimension aims to conduct a comprehensive study of one of the most substantial, distincitve, important and little known elements of Ukrainian musical history – polyphonic (partes) Ukrainian singing of the XVII century. This era marked radical changes in the domain of music: the monophonic singing traditional for church practice was replaced by polyphony! This allowed the emergence of the distinctive Ukrainian partes, which consists of thousands of pieces by predominantly unknown authors. The fusion of western tendencies and local tradition created a wonderful synthesis, which allows us to speak of the phenomenon of Ukrainian baroque.

Despite this, though partes was already being discovered in the ХІХ century, it still remains known only within the professional music sphere! It still hasn't received such recognition as the Ukrainian baroque heritage in painting, architecture, literature and philosophy. Reflecting on the reasons for this, discovering existing research groups and inspiring new ones, performing the repertoire on a modern level of understanding of this musical tradition, and finally introducing the wide public to this part of history – these are the long-term goals of the project, launched by Open Opera Ukraine.

The project involves scientists (both Ukrainian and foreign), performing musicians, cultural trendsetters, musical journalists and other members of the humanitarian sphere cooperating for several years with the long-term goal of presenting this aspect of musical history in a broad sociopolitical and cultural context. 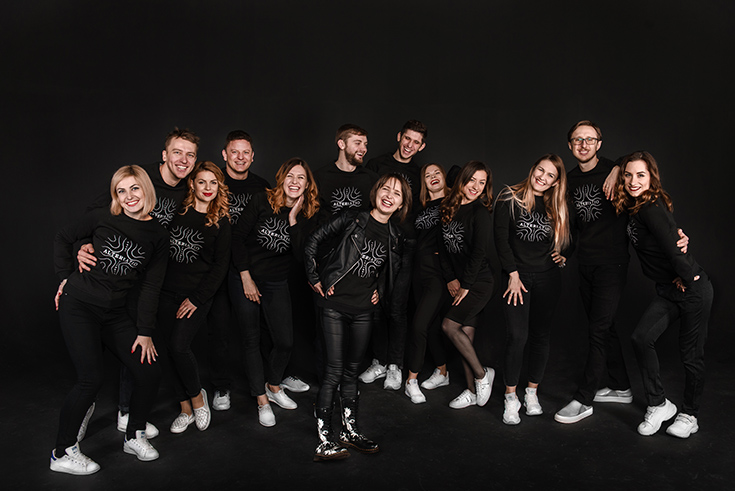 The new performance program of the Сontemporary Music Vocal Ensemble Alter Ratio - CULT - is built around the sounds of various world religious practices and cults. Ritualism, ritual actions, specific musical instruments and vocal techniques are combined with the musical language and composition technique of the modern Western European school of composition. In the pieces of this program, the classical vocal and choral techniques are supplemented with the possibilities of extended vocal techniques, ritual instruments (gongs, singing bowls, stones, shaman tambourine) are used along with classical orchestral instruments (vibraphone, oboe).Singers play traditional instruments (singing bowls, mini-gongs and other small percussion instruments), as it should be during ritual actions.

The program is composed of pieces by Ukrainian and foreign composers. Certain pieces were commissioned by Vocal Ensemble Alter Ratio (artistic director and conductor - Olga Prykhodko). Comission for composers and promotion of music by Ukrainian composers is one of the main activities of the Ensemble. The Cult includes works by the famous Ukrainian composer Victoria Poleva and a work by an young composer Boris Loginov. Also commissioned by the Ensemble, the cycle of Maxim Kolomiiets Marian antiphons was written, which became part of a large project of the Ensemble called Mariologia (series of concerts and CD recording, 2017 - 2019). Landscapes by composer Anna Korsun, who now lives and works in Germany, won first prize in 2014 at the prestigious international composers competition Gaudeamus.

The program is complemented by the "cult" works of the American composer-experimenter Meridit Monk (excerpts from the performance A Celebration service) and the famous Estonian composer Veljo Tormis Raua needmine (The Curse of Iron).

Veljo Tormis / EE /
Raua needmine (Curse of Iron) for mixed choir and shamanic drum. On the texts of the Finnish epic "Kalevala" (adapted and supplemented). 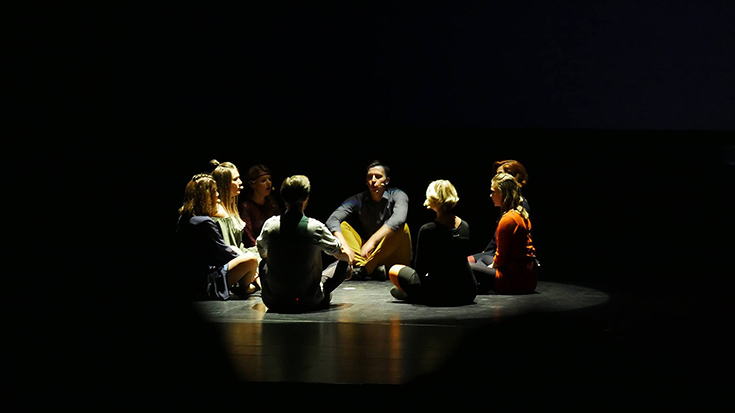 Game as the name of the project and the «sport» for musicians.
«The man who plays» is a project in which a duo of musicians test the concept of the game. Homo ludens – translated from Latin – a person who plays. This is the name of the composition of Volodymyr Runchak that gave this project the name. It is a game at the limit of possibilities and a game with the possibilities of a cello player for whom the game becomes an extreme musical sport.

Game as a category of thinking.
In this project, the game is the essence and is reproduced not only in the play of musicians on their instruments. In the compositions of Victoria Poleva and Johan Halvorsen, which consequentially frame the program of the project, the game is the basis of construction of musical works: a game with musical models of past epochs or with quotes from works of authors of the past. Abstract mathematical formulas were embodied in the «Cadenza» by the young composer, «Kazakh Mozart», Rakhat-Bi Abdysagin. His «Cadenza» will be performed for the first time in Ukraine.

Game as аn experiment.
The project program includes two works by Zoltan Almashi. In the one of them, the subject of such a «research» is the notion of «melody». But the title of the composition is misleadingly the listener. After all, according to the author, it is necessary to play with meanings as paradoxically as possible. The «Suite» consists of different «games», so you must have to hear and see it.

Game as a mystification.
Perhaps, the first time in Ukraine, as part of the project, will be performed the composition by an unknown composer. His musical manuscript Zoltan Almashi found in Lviv and edited. The manuscript is signed by Vasisualiy Bolbochanskiy. The musical language of this composition «says», probably, it was created in the 1980s or 1990s. Actually, the search of a real author is vain. Maybe, a concert in Odesa will help to answer on this mystery?..

«Game» and «man» are the basic notions in the conception of the Zoltan Almashi’s project «The man who plays». What and who will be played? It will depend on the moment of sound of the each composition. According to the Dutch historian and cultural theorist Johan Huizinga, who studied the game element of culture, the game exists within certain limits of the place and time, and its course and meaning is contained in itself.

Johan Halvorsen (1864-1935, Norway)
«Passacaglia on a theme from Suite № 7 by George Frideric Handel» for violin and cello 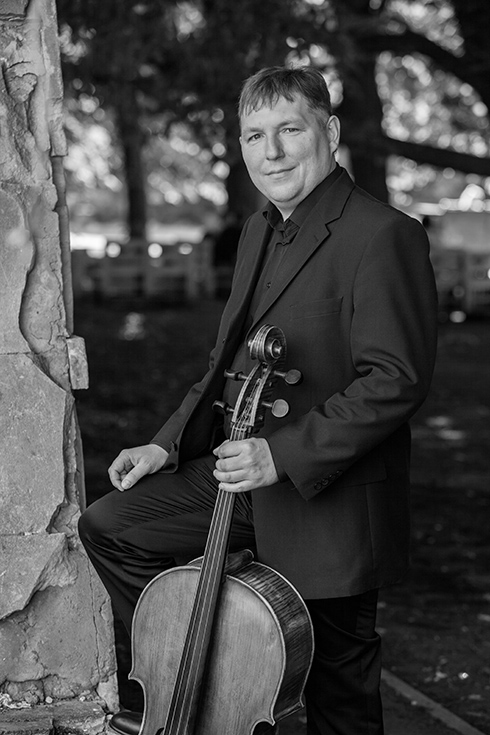 Born into a violinist family, Zoltan Almashi studied at the Lviv secondary specialized boarding school named after Solomija Krushelnytska at the department of the strings instruments and successfully graduated in 1993. He continued his studies at the Lviv National Music Academy named after Mykola Lysenko in the class of Professor Yevgenij Lanyuk in two directions: cello (graduated in 1998) and composition (graduated in 1999). 1999–2002 continued his Ph.D. study at the department of composition in the National Music Academy of Ukraine named after Petr Tchaikovsky in the class of professor Evgenij Stankovych.

2008 trained in Poland by composer Professor A. Lason.

Member of the National Union of Composers of Ukraine (since 2001).

Zoltan Almashi combines composing with teaching at the Tchaikovsky National Music Academy of Ukraine (since 2002) and the work of the artist, soloist-instrumentalist of the National Chamber Soloists "Kyiv Chamber" and the Rikoshet Contemporary Music Ensemble (both since 2000). Member of Ukrainian contemporary music ensemble Nostri Temporis (since 2007); cellist
and artistic director of the Lev Revutsky  String Quartet (since 2018). One of the founders and directors of the Gulf Stream Festival of Classical and Contemporary Chamber Music (since 2012).

As a composer and cellist, he constantly participates in contemporary music and contemporary art festivals in Ukraine: Contrasts, Young Music Forum, Kyiv Music Fest, Musical Premieres of the Season, Two Days and Two Nights of New Music, Gogolfest, Odessa Classic. Zoltan Almashi is the author of more than 80 works, mainly for chamber orchestra. In his work he strives for bright imagery, emotional expression, structural clarity and dramatic completion. Focusing generally on neo-romantic trends in contemporary music, he also makes extensive use of compositional writing tools developed by 20th-century innovators. Actively uses folklore samples, experiments with genres and styles of music of previous eras, tries out new sounds and forms of musical art (in particular, the work "Van Gogh for Kitchen Utensils and Gift Package", 2011).

The composer has created many works to order by various creative associations and musical institutions. Thus, at the request of the European Cultural Society, Sonata No. 2 "Facets" for cello and piano (2004) was created. Many pieces of Zoltan Almashi have been written specifically for the contemporary music ensembles Nostri Temporis, Ricochet, and especially for the National Soloist Ensemble "Kyiv Kamerata".

He is the author of music for the musical and theatrical mystery Symphony of Dialogues (2007; directed by O. Balaban).
Among the major works of the composer: "Stairs ..." for flute, clarinet, violin, cello and piano (2001), Symphony No. 2 "Island" for Grand Symphony Orchestra (2010), Chamber Symphony No. 1 (2011), "Concerto grosso # 4 "Seasons" for violin and chamber orchestra (2011), chamber symphony # 2 "Dialogue of two drunks about the meaning of being" (2012), chamber cantata for violin and strings (2015), "Suprun-rhapsody" for viola and strings (2016) and others.
Zoltan Almashi's works were performed by the Akademos String Quartet (Poland), the Kaunas Philharmonic String Quartet (Lithuania), the Moscow Contemporary Music Ensemble (Russian Federation), the Kyiv Soloists Chamber Orchestra, the Lviv Virtuoso Chamber Orchestra, and the National  Orchestra of Ukraine, etc .; conducted by S. Kamartin, O. Lyniv, V. Matyukhin, V. Sirenko and others.
His works are performed in Belarus, Moldova, the Netherlands, Germany, Poland, the United States, France, Switzerland, Chile and other countries. 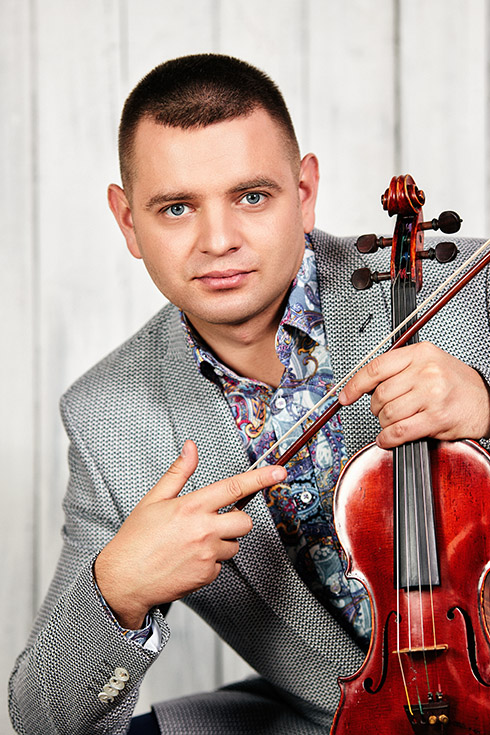 Eduard started to play the violin at 4 years old.  He has roots from a family of musicians, where all generations of men played the violin. He won many competitions and participated as a soloist with symphony and chamber orchestras.

Eduard graduated from the National music academy by Piotr Tchaikovsky in Kyiv, where he took lessons from outstanding teachers: Bogodar Kotorovych, Bogdana Pivnenko and Olha Rivniak. Having learned a lot from his famous teachers, Eduard focused his performing efforts on getting the highest professional quality and now he is proud to be working as a part of The National Ensemble of soloists "Kyiv Kamerata" under the direction by conductor and pianist Valerii  Matiukhin. Since 2017, he has been an active participant in KyivMusicFest, Premiers of the Season, Meridian Chernowitz and Meridian Poltava, a member of Revutskyi String Quartet.

Eduard always impressed the audience with his charisma and virtuoso technique. He is an outstanding musician and gifted performer. 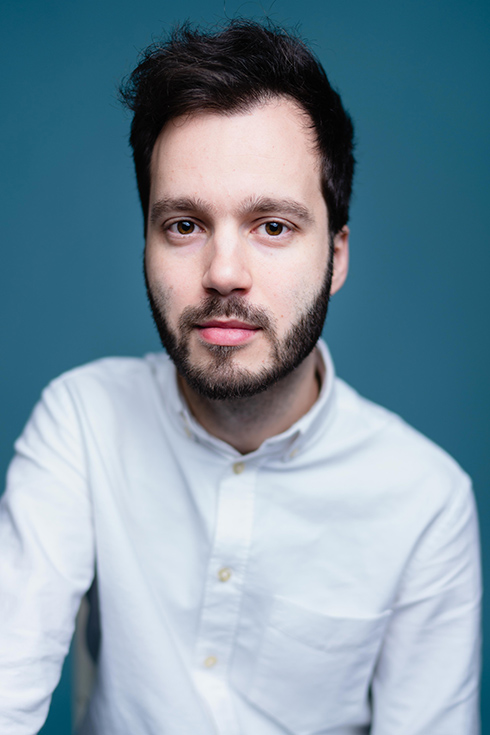 Born in Kyiv, Ukraine in 1988, Antonii Baryshevskyi
is a prize-winner of many international piano contests.
Among those prizes are:

He had concerts in almost all the European countries, Israel, Japan, South Korea, and the USA.